But I do still write letters now and then. This blog, The Letter Writing Revolution, has got me thinking about those letters and what they represent.

For instance, sometimes I write letters to and on behalf of people I don’t even know. I do this through Amnesty International, a group whose millions of members and supporters work to protect human rights around the world.

After my second child was born, I rejoined Amnesty International, which I’d belonged to in my twenties. Late at night after getting the kids to bed, bleary-eyed but wanting to interact with the wider world, I would read a case now and then on the Amnesty International Canada website and write a letter on behalf of the people I read about – like the members of a Zimbabwean human rights organisation who were being assaulted and arrested, or opposition leaders in Chad who had disappeared and were believed to be in detention and at risk of torture. After a while I signed up to receive “Urgent Actions,” which meant that every month or two I’d receive an e-mail message about someone whose human rights were at risk, and I’d write a letter on their behalf. 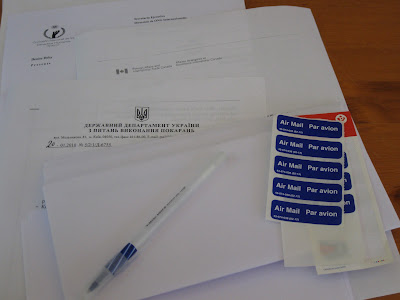 The letters I wrote were never more than a page long, and I’d write to the authority named, often the head of state or a government minister or ambassador. I’d politely describe my concern about the person or people facing human rights abuses, and sign my name. Handwriting or typing the letters didn’t actually take that much time, and I’d challenge myself to find some personal link to the country or to use my own words, always using Amnesty International’s information as a guide.

Now, a few years later, I realise I’ve written dozens of letters. I’ve also participated in Amnesty International’s last two annual Write for Rights “writeathons,” with a stack of paper, cards, envelopes and stamps beside me. I’ve written to the presidents of the Democratic Republic of Congo and Nicaragua, to the Leader of the Islamic Republic of Iran, to the Prime Minister of Canada, and many others. I’ve written cards to people imprisoned because of their political or religious beliefs, or their families. As I write, I think about what it means for the people who are receiving the correspondence – will my letter make them stop and think that an ordinary person living in Canada is writing to them about what is happening where they live?

It’s difficult to make a direct connection between letters sent and improvements in someone’s human rights situation, but positive change happens in over one-third of appeal cases. Amnesty International sometimes provides e-mail addresses and posts online petitions, but its Urgent Action coordinators believe that “handwritten letters carry more weight than an emailed appeal which is informal, impersonal and easy to delete.” Letters show, they say, that you are willing to take time and effort to write about someone. 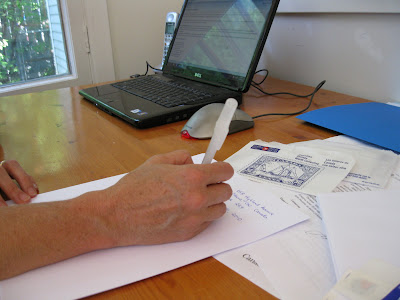 Then there’s the personal connection. A couple of years ago I read in an Amnesty International newsletter about a Sudanese poet who was imprisoned in 1989 for his political beliefs. He received some two thousand cards, which he managed to keep hidden during eleven house searches after his release. In 2008 he flew to London and wrote back to everyone who had included a return address, inviting them to a thank-you party.

I’ve yet to be invited to a party, but I’ve received a few replies to my letters, including from several Canadian government ministers, the Mexican Ambassador, and the head of a government department in the Ukraine (along with official translation). I can’t be sure if any of my letters have made a difference, but if a letter I write might be read, then it’s one that I want to write.