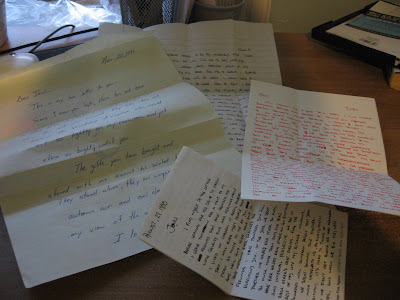 Love Letter: A love letter is a romantic way to express feelings of love in written form. Delivered by hand, by mail or romantically left in a secret location, the letter may be anything from a short and simple message of love to a lengthy explanation of feelings. (Wikipedia)

One of my favourite classifications of a letter is the letter expressing love. Nothing says 'I love you' like the time spent thinking of your beloved while transcribing your thoughts into words and putting them on paper. These thoughts of love are now tangible and cannot be denied or misunderstood when they are clearly evident in ink on paper. Yes, over the years, feelings may change, you may love an another and your lover may have moved on but in that moment in time there is proof that you were loved.


In order to conduct research for this particular post, I opened up my old trunk that contains almost nothing else but letters. A few boxes contain only love letters. I am not sure why I have kept them all of these years but reading through several of them has left me reflective and even a bit weepy. I can recall in a moment what each letter was about, what I was going through, what I was experiencing as a teenager and as a young woman in her twenties. One of the letters describes a comforting statement that says, "Let me give you shelter in a treehouse and perhaps we will share a kiss or two." He was referring to a treehouse that we discovered one rainy night where our first kiss took place. The irony is that I now live in the house next door to that property. The treehouse is long gone but that letter reminded me of that time.


My first love letter was from a 13-year old boy that I met in a hockey rink in January 1984. We spotted each other across the ice surface. I was spending the weekend with a cousin and she went to school with this boy. We were introduced and our young romance began. We wrote letters to one another between hockey games and tournaments. It seemed that the only way we could see each other was to attend events at our local rinks. The good thing was that he knew a girl who came to my town often and she would hand deliver his letters which sometimes contained a photo or even the pencil he used in school that day. This love affair was over within a year but I hung onto his letters. I especially liked the one that contained the words to a new hit song that was in the charts that year. It was called "Heaven" by Bryan Adams. It's hilarious now to think that this boy was writing such heavy lyrics to a young girl he had just met. That's love for you.


Love came again when I was 16-years old and I had one of the most memorable summers of my life~ the summer of 1987. It was a summer of discovery and adventure and coming of age. It was also the summer my parents separated and I found love in a lanky, 15-year old boy who was a rebel without a cause, an artist, a poet, a musician and who treated me in a way that an angry and confused teen girl needed to be treated. Unfortunately, my dad wasn't too fond of the dyed hair, the skull buckles on his boots and the words "Bondage and Discipline" that were spray painted across the back of his leather jacket. But my dad didn't understand. You know how parents can be. What I have, though, is proof of that year in the form of letters, lots of letters.....handwritten and honest and loving. Here's a bit of just one:


"In this year we spent together, we have helped each other so much, so much more than any two people have ever helped each other on an emotional and internal perspective. We are in each other's debt forever. For the rest of my life, my actions, my violations, my successes will somehow reflect that year."
As I entered my 20's, I had a relationship with a guy that was a bit older than me. Our romance was a lot of fun but fleeting. It ended when he thought we should be more serious. I disagreed and he told me that I would never find anyone as good as him. After that statement, I knew, most certainly, that I would. I did find one letter in particular from him that I thought I would share:
"This is my love letter to you. My life has not known the friendship of anyone who could sit so lightly on my conscience and yet shine so brightly; until you. The gifts you have brought and shared with me cannot be scaled by value. They stand alone; they are unique. Like crisp autumn air and cool, clear water, you enhance my view of the world. I love you."
Just before I went to college, I met another young man unexpectedly. I have a large, over- stuffed envelope of letters from him but I couldn't bear to share any of them with you, dear reader. He was the same person who insisted that I destroy the letters from the 13-year old boy who wrote me my first love letter........and for maybe the only time in my life, I obeyed.
What is the big deal about destroying letters from 10 years earlier? The big deal is that after a few unsuccessful love affairs, hundreds of love letters written and received, and a one or two broken hearts along the way, I reunited with that boy from the rink when he was 26 and I was 25. That was 14 years ago and today we celebrate our 11th wedding anniversary. His love letters are few and far between now although I do get one or two per year. His actions speak much louder than his words (written or otherwise).
In celebration of my marriage, I am off to write a love letter to him. I suggest and encourage you to do the same if you are blessed enough to share your life with someone worthwhile. And remember, a love letter can be written to your child, your sibling, your friend, etc. Not sure what to write? Start with "I love you" and then just write what comes naturally. Leave the letter on their pillow for them to find before bed or maybe tuck it into their bag so that it is discovered at work. Then, witness the magic of the simple, handwritten love letter.
It is my wish that today you will write a letter of love (long or short) and then don't forget to tell me all about it!
Posted by Julie at 8:48 PM