A Box of Letters

Eldon Keon was my paternal grandfather and he and my grandmother, Pearl Conway, married in June of 1940. Their first child was born in 1941 followed in successive years by three more children. My father, Stanley, was born third in line.

My grandfather passed away in 1989 and my grandmother found herself living alone in their home that they moved to in the early 80's after their retirement. I am sure the loss of her love was enormous and I remember the sparkle was gone from her eyes for a long time after he was gone. Grandma continued to live in that house until just after her 90th birthday when she made a decision to move into a retirement home just around the corner from where she had been living on her own. It was almost two years exactly after this move that Grandma became unwell and by early November 2010, she was hospitalized.

When it became apparent that my sweet Grandmother likely wasn't going to live much longer, she told me that she had had a very good life. I asked her what the highlights were and she replied without hesitation, "Meeting Eldon." This was quickly followed by: "My four children, my grandchildren and my great grandchildren." Her only request for Christmas was to be surrounded by family. She got her wish when my parents brought her home on December 27th to die peacefully and surrounded by loved ones. We imagined at the time of her passing, that she ran to Grandpa who had been patiently waiting for her for 22 years. I also had a sense that they were in the room with us watching us weep over Grandma's body knowing that this amazing Matriarch was gone.

And what is left? Odds and ends of a life that was neither filled with monetary wealth or extravagance. The grandchildren chose pieces of her jewelery to have something tangible to remember her by. But probably the most valuable thing that Grandma left behind was a box covered in pastel roses containing all of the letters she exchanged with my grandfather.

My grandparents lived apart at times in their marriage when my grandpa left to work in the mines and my grandma stayed home with the children until she joined him in 1944 in a small, mining community in the Ottawa Valley. There is one written by my Grandpa to my Grandma on April 22nd 1943 (the day of my father's birth).  Part of it reads: 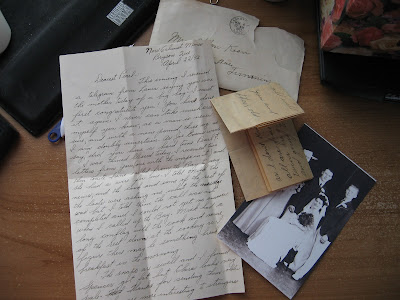 I am not sure what will become of these letters. I would like to read through them all to piece together their history and love story. And yet, I do not as I feel that perhaps this correspondence was not to be shared years later with extended family that didn't even exist when they were written. We did read a few letters to Grandma in her final days that Grandpa had written years earlier.....almost a lifetime ago when she was young and vibrant and full of life. We told her that he was waiting for her and she nodded knowingly.
Posted by Julie at 5:36 PM