Letters in a Time of Tragedy

In 2001, my husband and I had recently moved back to Ontario from British Columbia. We were renting a basement apartment in the country near the city of Ottawa while we decided where we wanted to buy our first home and settle down.

On the morning of September 11th 2001, he went to work as usual and I watched a bit of the news while eating my breakfast before going to work in my studio which was essentially the second bedroom of the apartment. I left the television on although muted it. I recall going into the livingroom and kitchen periodically and noticing the television but didn't give it much thought. I assumed it was a movie or something that was playing. It didn't register that it was live news. The phone rang around 9am and my sister asked me if I had the television on. She was home and not working as her second child was due within a month or so. We both watched in horror, moments later, as the second plane flew into the second WTC tower. Soon, my husband, who worked at a news station, called me to say he wasn't sure when he would get home. At that point, no one was sure what was happening. Would other major cities be targeted? At the time, my husband worked in the capital city of Canada. 9/11 is one of those events that each one of us remembers exactly what we were doing and where we were on that morning.

A part of my journey to NYC was to visit Ground Zero. After going into the American Express building and standing in front of a glass wall which overlooks the former WTC tower site, my dad and I ditched the tour and made our way across to St. Paul's Chapel. This small chapel built in 1766 stands in the middle of giant skyscrapers in downtown New York City. The chapel's backyard, which is also a small cemetary, backs onto Church Street. Across Church Street is Ground Zero. When the various explosions occurred and eventually when the towers came down on 9/11, the windows of the surrounding buildings, within a mile and a half radius, shattered. The windows of this church remained intact and the church was spared from destruction. It is believed that the ancient windows contain so much lead in the original glass that they withstood the powerful fall of the WTC towers.

﻿﻿
﻿﻿
﻿
﻿ Immediately following the attacks until May 2002, St. Paul's Chapel was home to an extraordinary round-the-clock volunteer relief ministry for recovery workers at Ground Zero. Approximately 14, 000 volunteers offered their assistance to those who were involved in the recovery effort. There were meals, cots, prayer services, counsel and even professionals like Registered Massage Therapists, Chiropractors and Podiatrists volunteered their time and skill to look after all of the needs of the recovery crews. It was a place of refuge.....a sacred space where hundreds of recovery workers could rest, obtain medical attention and support. 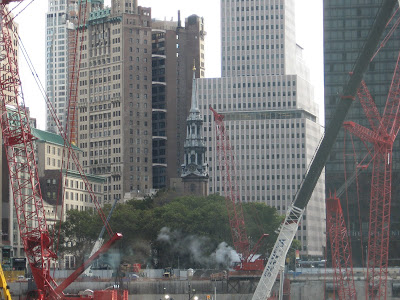 When you arrive at St. Paul's Chapel, you can follow a display that is on the front steps that briefly describes the volunteer ministry and the events of 9/11 from the time the first tower was hit until the relief ministry drew to a close in May 2002. The exhibit is called Unwavering Spirit: Hope and Healing at Ground Zero. The majority of the exhibit is displayed inside the Chapel. Most of the pews have been removed to make space for the mementos and the exhibit. A dusty fire fighter's uniform and boots are casually draped over George Washington's pew. Each day at 12:30 pm there is a Prayers for Peace service in the centre of the chapel. Holy Eucharist is offered every Sunday at 8am and 10am.

What struck me was the incredible amount of hand written cards and letters which were sent in the days, weeks and months following the 9/11 attacks. Each letter and card is there displayed......hundreds of them. I was not allowed to take photographs within the chapel but took the following photo from the display outside the chapel. 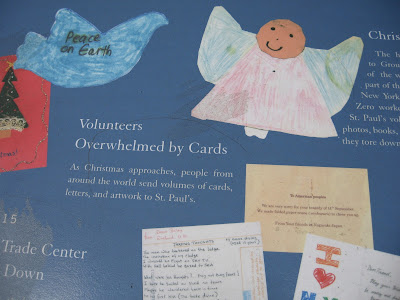 It was very moving and very emotional to stand where such tragedy took place on September 11th 2001.
The following poem was written by J. Chester Johnson and I want to share it here with you:


St. Paul's Chapel
It stood. Not a window broken. Not a stone dislodged.
It stood when nothing else did.
It stood when terrorists brought September down.
It stood among myths. It stood among ruins.
To stand was its purpose, long lines prove that.
It stands, and around it now, a shrine of letters, poems, acrostics, litter of the heart.
It is the standing people want:
To grieve, serve and tend
celebrate the lasting stone of St. Paul's Chapel.
And deep into its thick breath, the largest banner
fittingly from Oklahoma climbs heavenward
with hands as stars, and stripes, hands as a flag;
and a rescuer reaches for a stuffed toy
to collect a touch;
and George Washington's pew doesn't go unused.
Charity fills a hole or two.
It stood in place of other sorts.
It stood when nothing else could.
The great had fallen, as the brute hardware came down.
It stood.
~ J. Chester Johnson
﻿That afternoon, dad and I walked to Central Park and visited Strawberry Fields. I pulled the following excerpt from the Central Park website:
"Located near Central Park West between 71st and 74th Streets, Strawberry Fields is a 2.5 acre area of Central Park that pays tribute to the late Beatle, John Lennon, singer, songwriter, musician and peace activist. John Lennon and his wife Yoko Ono lived in the Dakota Apartments adjacently located to this area of the park. It was here, walking into his home, on December 8, 1980, that John Lennon was murdered and shot dead. To commemorate his life, talents and memory, on March 26, 1981, City Council Member Henry J. Stern designated this area, the couple's favorite in Central Park, as Strawberry Fields. Named after the title of the Beatles' song "Strawberry Fields Forever," the teardrop shaped region was re-landscaped by the Central Park Conservancy with the help of landscape architect Bruce Kelley and a generous $1 million donation from Yoko Ono.
The iconic black and white Imagine mosaic, designed by a team of artists from the Italian city of Naples, lies in the center of Strawberry Fields. Named after another famous song by John Lennon, "Imagine" evokes a vision and hope for a world without strife, war and conflict."
﻿